A large canopy is suspended above the Greek National Opera building and the Lighthouse, 47m. above sea level. The canopy measures one hectare, roughly equal to an American football field, and weighs 4,500 tons, equivalent to as many as 160 tri-axle buses. The canopy’s section is reminiscent of an airplane wing, as, in an area as open and exposed as the Faliro Delta, wind can easily reach high speeds, and the canopy’s shape must not offer resistance. To arrive at the final form of the canopy, 750 panels were assembled.

The energy canopy was activated in May 2017. From June to December (2017), it met SNFCC’s energy requirements by 27.98% and the canopy’s energy production was 1,458,387 kWh, preventing the release of 1,442 tons of CO2, equal to covering the average monthly energy requirements of 1,251 greek households. 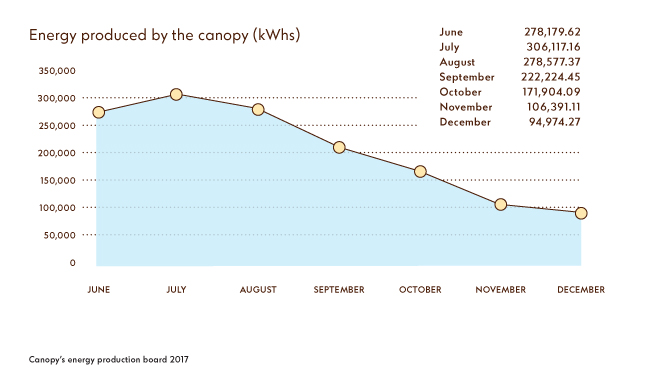