It was with a majestic work of music, inseparably linked with the breathtaking panoramic images of Athens and the Saronic Gulf at sunset, and inspired by Kiki Dimoula’s poem “A Lady Suspended”, that Dimitris Kamarotos responded to the Stavros Niarchos Foundation Cultural Center’s invitation to compose and perform a piece for its inaugural concert at the Energy Canopy, the SNFCC’s highest point.

A profound and enthralling musical and performative meditation upon the relationship between Nature and Culture, Man as part of Nature and as Master of Nature, and the place that Art, and especially Music, occupies in the current urban landscape and soundscape.

Joining Dimitris Kamarotos was mezzo-soprano Anna Pangalou, who performed the work with an impressive technique, while unfailingly remaining musically true to its essence.

The #snfccAtHome: music series, where important Greek artists perform concerts which are broadcasted live from emblematic locations within the SNFCC, without an audience and in compliance with all the necessary safety measures, is realized through a grant by the Stavros Niarchos Foundation (SNF), and has, to date, hosted, with great success, performances by Theodore, Stavros Lantsias, and Dimitra Galani. 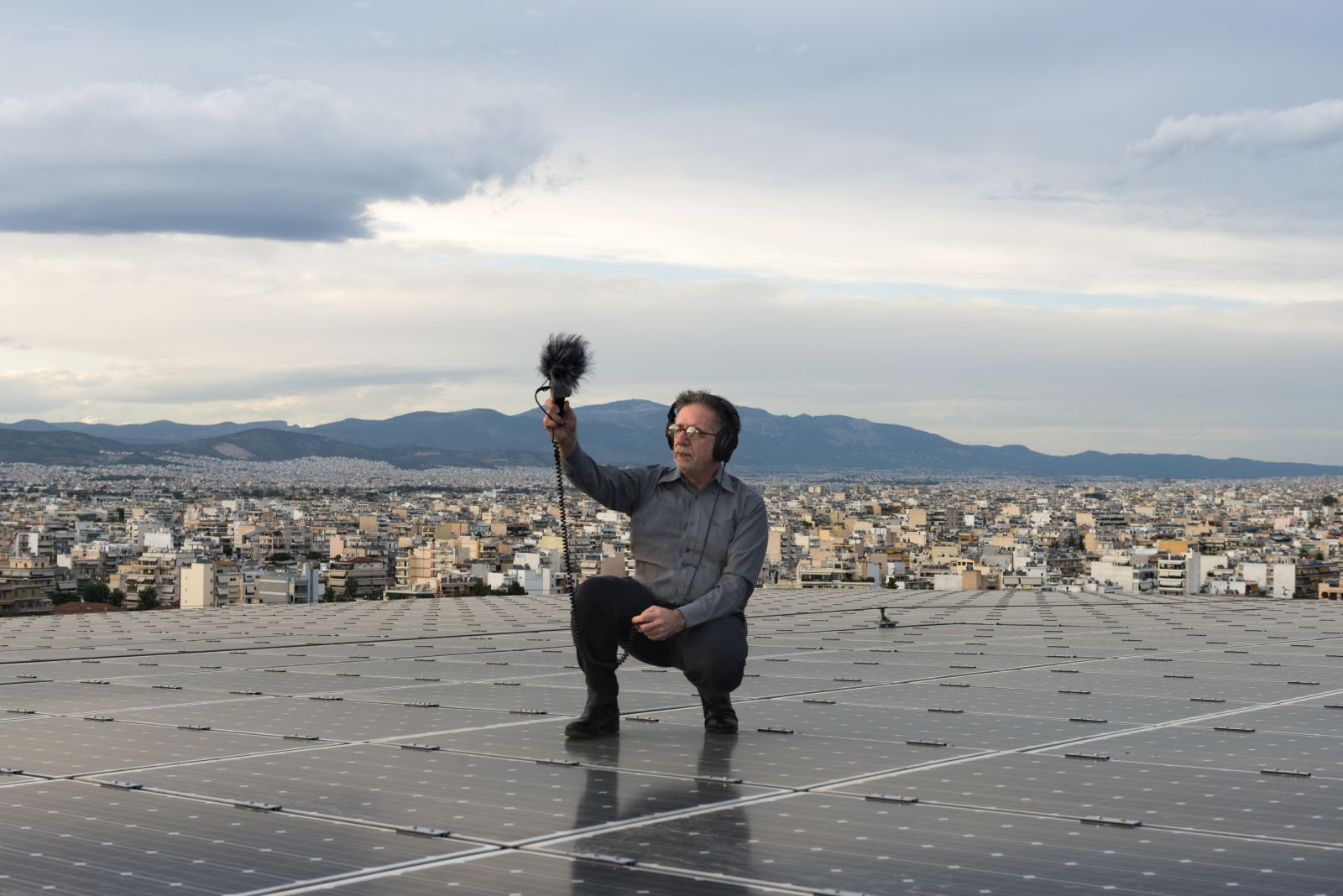 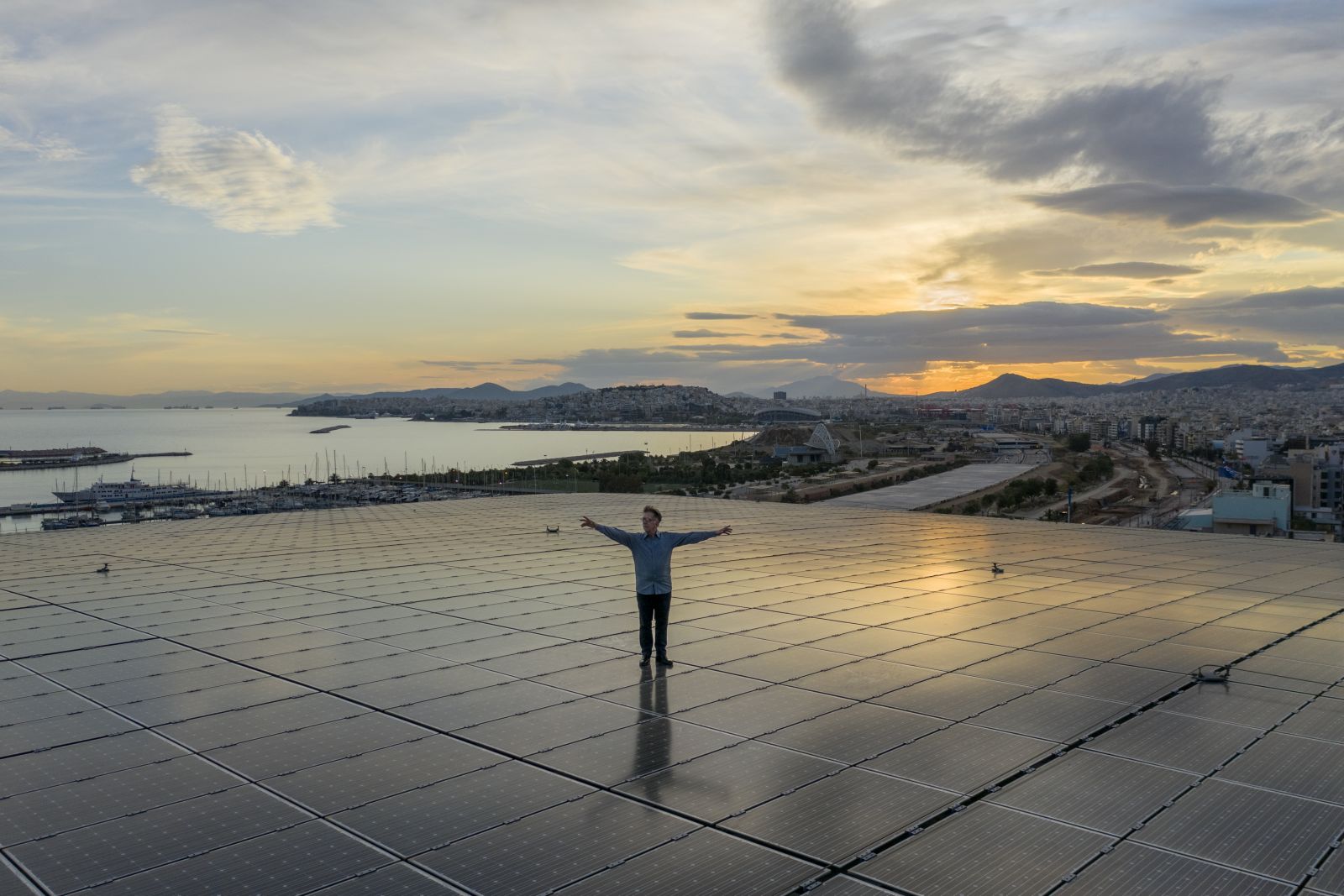 Dimitris Kamarotos studied composition, clarinet, musicology and music, in Greece and in France, under Émile Damais, Marc Battier, Maurice Jarre and Iannis Xenakis. He has worked at the IRCAM (Institut de Recherche et Coordination Acoustique/Musique) and at the Contemporary Music Research Center in Athens. He contributes to the development of theatrical dramaturgy through his musical compositions, performances and sound design. He has collaborated with numerous directors, both in Greece and abroad, on performances staged at the Greek National Theatre, the ancient theater of Epidaurus, international theaters and festivals. His music ranges freely between instrumental/vocal and acousmatic/electroacoustic. His most recent release is the LP Electromagnetic Landscapes (Intersonik Recordings, 2018).

Anna Pangalou is a voice soloist with a dark dramatic timbre, who experiments through the boundaries of classical vocal practices and the new forms that are emerging from experimental sound practices. As a soloist, she has performed in Austria, Germany, Italy, France, Egypt, Turkey, Cyprus, the US, and Greece. She specializes in contemporary music. Contemporary composers have written works for her voice, and she takes part in modernist collaborations for the creation of visual artworks and performances. She has been awarded scholarships by the Onassis and Fulbright foundations, and a prize in the Dimitri Mitropoulos International Competition. She is known for her flexibility in switching between various musical genres/timbres, and vocal experimentations. She is currently engaged in creating visual artworks using her voice as the primary tool.

The SNFCC’s Energy Canopy is suspended 17 meters above the building of the National Opera of Greece and the Lighthouse, and 47 meters above sea level. It measures 100x100 meters, spanning one hectare, which is the equivalent of 1.5 soccer fields, and it weighs 4,500 tons. The canopy’s section is reminiscent of an airplane wing, as, in an area as open and exposed as the Faliro Delta, the wind often reaches high speeds, and the canopy’s shape must minimize aerodynamic pressure. To arrive at the final form of the canopy, 750 panels were assembled.